As far as we know (based on what the prior owner, former campers, counselors and neighbors have told us), Camp Woodbury has been in existence for about 100 years. Supposedly, it started out as Joe Louis’s training camp, then transitioned in the 1930s to a Detroit YWCA camp serving African American youth, and eventually to a VFW camp. The Woodbury name comes from Clem R. Woodbury, a World War I veteran and Detroit policeman who was active in the Detroit VFW chapter.

The earliest buildings on the property were cabins 4, 5, 6, 7 and the lodge. Cabins 1, 2, 3 and the boat house were built when the camp was owned by the VFW during the 50s and 60s. Cabins 1, 2, 3 and 5 had western names, Fargo, Wichita, Santa Fe and Apache and each housed about 20 kids. Cabins 4 and 7 were counselors cabins. They left their names on the ceilings. The earliest we have found is 1932 in 7A.

In 1968, Doris McEvoy and her husband purchased the camp. Tragically her husband drowned in the lake shortly after their purchase. Doris ran the camp on her own as a private fishing and family recreational camp. At one point Doris developed a plan for 50 RV campsites in addition to the cabins but it was never approved by the township.

Sometime in the 1980s, Doris converted Cabins 1, 2 and 3 to year-round residences. Cabin 4 had been built as the director’s cabin and already had heat and plumbing. She rented the cabins year-round in addition to the RV and tent camping during the summer. Facing financial challenges, she had difficulty maintaining the property she loved. Finally, after 31 years of running the camp, she sold the property to Jan and Tom.

The lodge sometime in the '60's 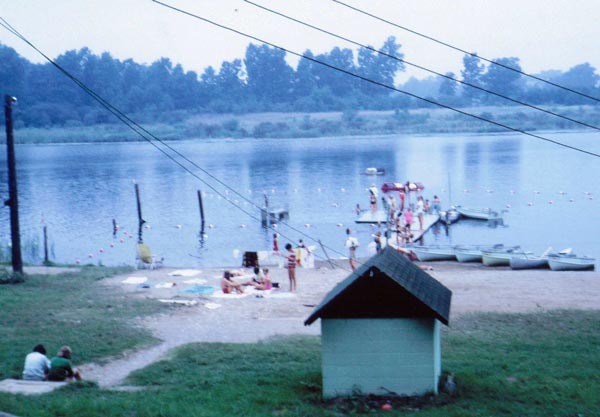 That was the small in-column listing advertising the property spotted by current owner Jan Muhleman. It prompted an immediate visit by Jan and her husband Tom Hollyer. A business owner herself, Jan bonded with Doris and appreciated the effort she had made to preserve the property. It was clear that the camp was created so that lots of people could enjoy it. Doris shared stories of caring for the property and providing for guests as they fished or swam or boated… and Jan was hooked (even though Tom said “Get me outta here!).

When she learned that an additional 50 acres was also for sale, Jan immediately agreed to buy it in order to restore the original parcel and maintain control of the perimeter of the lake. A later purchase of an additional 50 acres resulted in a total of over 150 acres and access to both Dexter Chelsea and Steinbach roads.

In need of love and attention

The camp buildings were in serious disrepair. Electrical service to several buildings was literally strung through the trees. (You can still see the wires sticking out of some of them.) Septic systems were old and plumbing had to be heat-taped to keep from freezing in the winter. Many of the roofs were so bad the boards were rotted and falling in. We even had a vulture family nesting inside the bath house. Imagine our surprise when we were greeted by a big black creature with a six-foot wingspan.

Over the last 18 years the buildings, grounds and utility infrastructure have been completely renovated. Well…almost completely. We still have two cabins and the boathouse to do…and we need a bigger barn…and… we are always thinking of something else to improve. We have tried to preserve the character of the camp but provide the creature comforts of home as well. A nice home, with heat and air-conditioning and indoor-plumbing and wooden walls and tile floors and comfy beds. You’ll see. 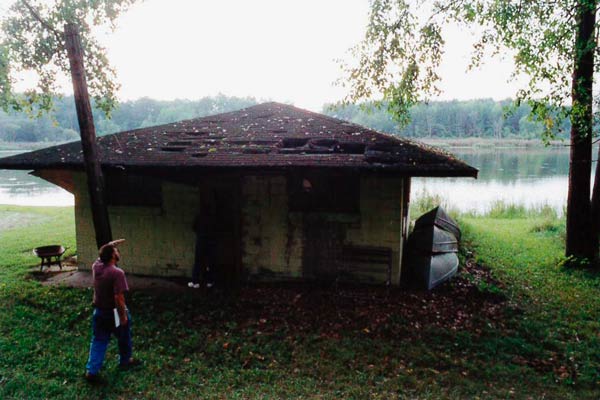 The boathouse (see holes in the roof?) 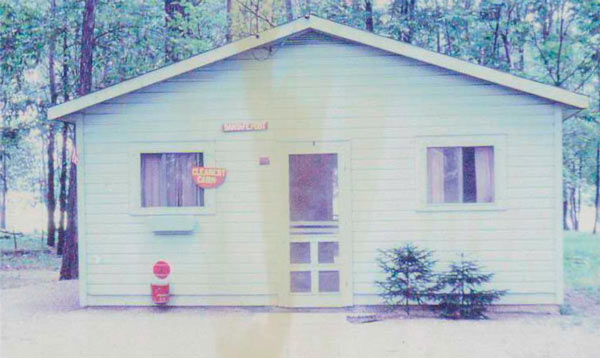 It was never our intention to become a wedding venue, it just happened. Tom’s cousin started it all by getting married at the lodge, then we let another friend use it. Pretty soon we were getting requests from all their friends. One of those weddings came to the attention of a Washtenaw County official who inquired about our sanitation system. And then the township suggested that although they recognized the property had always been a camp, we should apply for a special use permit and a state campground license. A lot of planning, applications, hearings, inspections, permitting and finally approvals ensued.

Our approvals came with constraints on numbers of guests, noise, hours and parking that really have not been limiting for most events and are comparable to other venues. We make sure our guests know what these are before they book with us. The property works best for people who want a quiet family-focused gathering at a beautiful, magical location.